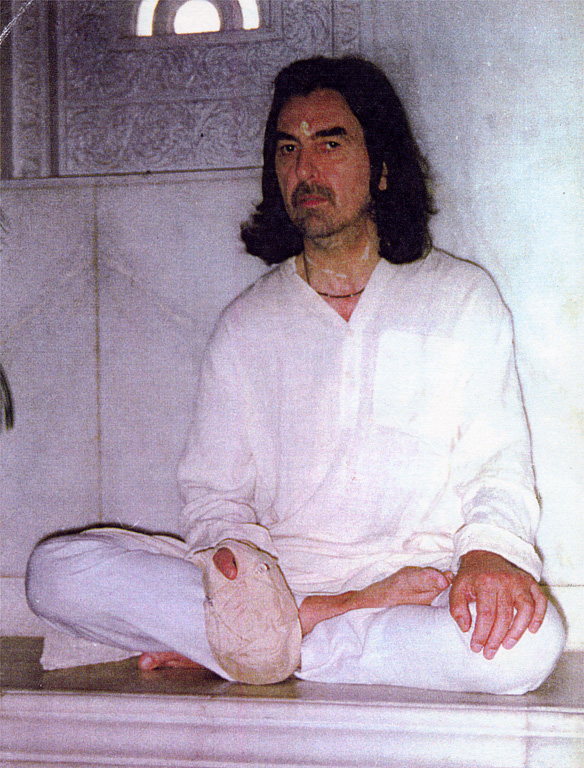 George Harrison was a member of what was, unarguably, the most famous rock band in history, The Beatles.  In this role, he played an extremely important part in affecting and shaping the culture of the Sixties.  The purpose of this study is to examine George Harrison’s religious conversion in the late-nineteen sixties, and the effect it had upon his music and his life, as well as the music and culture of the period.  Harrison married the sounds of two very different cultures by merging an Indian musical style (Raga) with Western pop, inspiring other musicians to experiment with other cultures’ music.  The Beatles publicly embraced many spiritual concepts through various books and leaders including the Maharishi Mahesh Yogi.  However, Harrison found his personal goal in His Divine Grace A.C. Bhaktivedanta Swami Prabhupada, the founder of the International Society for Krishna Consciousness and assisted that religious movement in many ways.

This study places George Harrison’s conversion, as well as that of many individuals from the Sixties Counterculture, in a theoretical method of conversion created by John Lofland and Rodney Stark.  The method, which consists of seven conditions, effectively defines the processes of conversion that are discussed within this paper.  Considering the success of songs such as “My Sweet Lord,” and “Give Me Love,” that contain his own personal declaration of faith, it can be seen that Harrison’s own spiritual quest had a great influence on the lives and music of others.  As the Sixties ended, the ex-Beatle immodestly embraced religion and hundreds of thousands followed his example.

This study concludes that Harrison’s musical pioneering spawned not only a “raga-rock” upsurge, but also a new musical style, deemed World Music.  He also had a major role in the success of the Hare Krishna Movement. Through his immersion in various aspects of Hinduism, Harrison opened the door to the spiritual exploration for a generation.  The profound effect and influence that George Harrison had in shaping many facets of the Sixties Counterculture continues to surface today through many contemporary musicians who incorporate the sounds and traditions of other cultures into their own work and lives.